A well-known Italian pasta factory,  very prominent also in the Asian markets, where quality is a key factor in the choice of suppliers, commissioned us the study and development of a machine vision system for controlling “long-cut” pasta in motion, which would be able to analyze and identify any existing defect in real time.

The originality of this project, but also its greatest difficulty, lies in the fact that, at the moment, no one within the “pasta sector” has managed to interface machine vision systems on moving products.

Below some images of the plant in which the testings, configuration and fine-tuning activities were carried out:

The testing phase requires the working with images acquired in monochrome:

The software, then, identifies the anomalies, generally consisting of dark "spots", through an analysis of the gray-levels variations; this analysis is carried out with a sophisticated adaptive filter that takes into account the vertical arrangement of the pasta strands, and therefore operates by isolating the differences in this direction, in comparison with the transversal differences due to the pasta strands:

At the later stage of study , which represents the final provision chosen by the customer, we set up the system to work with the acquisition of color images. 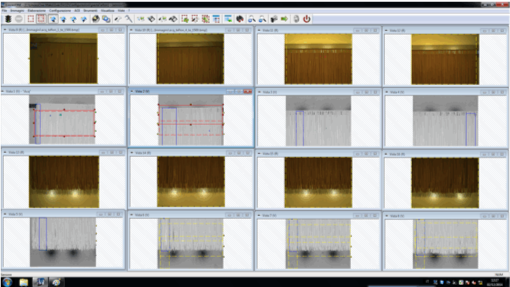 The LinceoONE system works not only on the differences in light intensity (i.e. on the fact that the spots are "darker") but also on the chromatic differences and on the "saturation" of the various areas of the image (the spots are therefore of a "different color " or are" less saturated " than the other image areas).

In the interests of resolution, 4 cameras in parallel are always used for each of the two sides of pasta to be checked. Below the screen showing the 8 color images acquired and the 8 images resulting from an extraction of the "BAND" concerned (for example the SATURATION). 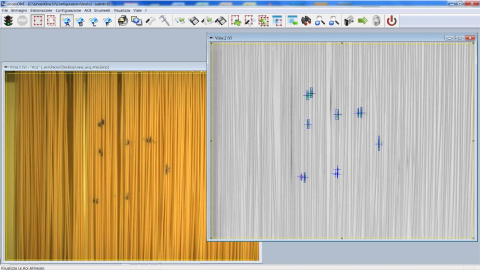 The same operation, if repeated for example on the RED component, the one prevalent in the RGB representation, improves the contrast of defects.

Another control strategy can be applied using the image extracted from the HSI representation, where the vertical dark areas, due exclusively to the shadows between the pasta strands, disappear.

This operation is resulting into a further improvement of the control areas and a better effectiveness of the applied algorithms. 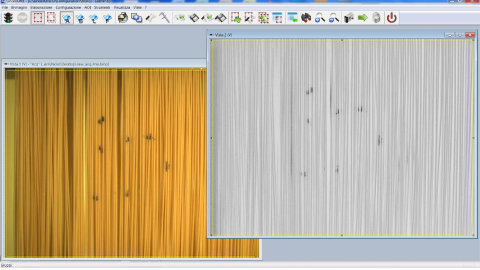 The customer was thus able to implement a robust and reliable vision system that allows 100% control of the production of “long-cut” pasta and avoids unpleasant disputes on supplies; the LinceoONE system has also been particularly appreciated by various end customers (including foreign ones) who often, especially within the food sector, carry out surveys and inspections of production plants.