Deep Learning is a specific area of ​​research that studies the possibilities and methodologies of machine learning. Although the Italian terminology to define this sector is Deep Learning, it is rarely used, preferring the English wording.

Deep Learning: what it is and how it works

It is a branch of Machine Intelligence that today is probably at the peak of its development but which saw the dawning around the mid-sixties of the twentieth century, a period in which the first algorithms for the automatic learning of certain computers were developed.

Initially interested in this type of process were mainly Soviet and Japanese computer scientists who managed to create simple machine learning architectures that initially took a time considered too long to be applied and used: four days.

The following decades saw the improvement of learning structures, which became increasingly complex while, at the same time, machine learning time decreased.

In 1986 the term Deep Learning was born, even if its diffusion begins only from the year 2000. In recent years, following a series of excellent purchases, such as that of the company Deep Mind by Google, Deep Learning has entered (almost) the common language.

At the base of Deep Learning there are neural networks, that is particular algorithms able to decide autonomously, based on certain inputs given by the system. Depending on the development and the level of progress, neural networks can improve with experience, that is, recognize the variables that cause errors and eliminate them when it is necessary to repeat the same iteration. All this is made possible by the presence of a memory and a brain able to manage the different signals to combine them, in such a way as to give a result as close as possible to reality, that is exactly what is required.

To better understand the functioning of neural networks, we must think that they operate on certain data, which can be video or audio signals, colors, words, etc. Modern strategies have aimed at creating algorithms of two different types, the more general ones and the highly targeted ones.

The difference is given, above all, by the field of application, which can range from voice recognition to autonomous driving of means of transport, from the recognition of photos and videos, to much more such as machine vision. However, it should be specified that, although Deep Learning is currently being applied in many sectors, its potential is still very wide.

One of the fields of application of Deep Learning that most interests the general public is probably that relating to autonomous driving. The development is still in experimental phases and at prototypes level, but algorithms that allow cars to be taught how to drive in the absence of a human driver have been already created. 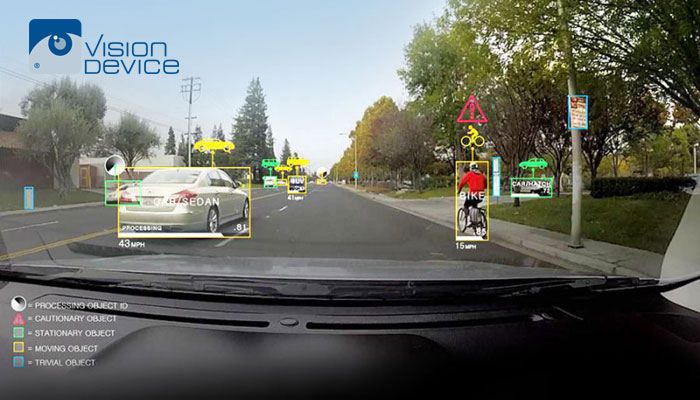 The latest prototypes presented are characterized by neural networks able to recognize the surrounding environment and, consequently, to be able to move alone, even in traffic. Naturally, in order to guarantee maximum safety, the cars will be equipped with a series of cameras whose images can be constantly processed by software to ensure control on the different sides of the road.

From this point of view, a fundamental branch of Deep Learning provides for the support of Machine Vision, which allows different sensors and cameras to reproduce the view of man, i.e. to recognize the whole context in which one moves, thus being able, through the brain, which directions to take.

Furthermore, various types of sensors will allow the recognition of sounds to increase the parameters that the computer has to consider in order to guarantee safe driving.

Unlike the first algorithms that took days to process a minimum number of information, current neural networks of car prototypes are able to manage and process over twenty billion operations per second, all learned through Deep Learning.

Certainly, this information includes all those related to safe driving, such as checking the carriageway, the presence of obstacles or pedestrians, the recognition of adverse weather conditions and much more.

Beyond the interesting applications in the world of cars, the fields in which we are working to improve neural networks and Deep Learning are different, and range from diagnostic programs in medicine to those of quality control in industrial production.

Medical diagnostics is probably the sector in which the interest in the development of neural networks is greater, given that in many cases algorithms are already used to support specialists. The success of neural networks in the medical sector is given precisely by the complexity of the human body and, therefore, by the different and probable solutions of the diagnostics themselves.

These, in fact, are mostly based on previous experiences that the doctor has had, lived or studied and which allow him to issue a specific diagnosis. Neural networks in this sector can, therefore, start from an already extensive cultural background and further improve, through deep learning, their knowledge in certain specific sectors, just like humans do but with greater speed.

Another area in which neural networks can guarantee a fundamental contribution is that of programs related to quality control systems in companies and industries. The quality of production, in fact, in most cases is recognized through sight and touch, that is by observing the products or feeling first hand. After defining the minimum level of quality, therefore, the quality control staff proceed by carrying out a selection and eliminating everything that does not correspond to the minimum level of company quality.

Obviously, in contexts of large productions, the possibility of controlling the quality of the products through a program capable of recognizing the characteristics of the product itself, would allow an important improvement in the speed of quality control. Neural networks, as well as machine vision, become fundamental in this context because they allow you to check the quality of products, any manufacturing defects, failures, wrong colors and much more, depending on the field in which you are operating.

However, to ensure complete work, the mechanical element must also be associated with the recognition system, capable of eliminating products that are not suitable for the defined standard.

To conclude, it can be said that Deep Learning today engages some of the brightest minds operating in the IT sector: start-ups, companies and research centers often collaborate to try to improve what, at the moment, although no longer just a theory, still cannot be used to its full potential in the various sectors.